Mary has been working hard and making great progress. Anyone who has been through a journey like this knows that the pounds don't come off as quickly as you get farther down the line - but the progress is about more than that.

Non-scale victories abound, so let's look at some of them:

What she actually did in March:

What's her next focus?

This journey is tough. We don't get to the low points overnight; there's often long stretches of self-doubt in there. That's why a big part of our monthly meeting and the next steps forward involved Mary's mentality and believing in herself.

She was frustrated at having lost 2 pounds over the last couple months; we reassured her that the weight is less of an issue than the other changes. She also lost 2 inches and is getting stronger and faster. We focused her April goals on those things.

Ladies and gentlemen, we are excited to announce the newest recipient of the 1DOS Foundation Fitness Scholarship. Mary Ellen Lee has lost 85+ pounds to date; she started running in 2019 as part of her journey. Like most of us, she went through the "I'm not really a runner" phase - but the numbers say that's not true.

In January 2020 she ran her first 5k; January 2021 saw her set a PR over 8 minutes faster than the previous year. January 2021 also saw her complete her first 10k race, over 5 minutes under her goal time. The progress, and her drive to success, are exciting to watch!

Mary's goal is to run a half marathon this year, and she will reach that goal with the help of the Foundation and the Shiver. The target is set: October 2, 2021 in Oklahoma City. Everything we do from now builds to that date.

Partnering with certified personal trainer Brandy Seidel to develop a training and nutrition plan, Mary will be posting regular updates. Our focus is not on the scale so much as overall fitness, so Brandy will be setting measurables there as additional intermediate goals.

The Foundation will be sponsoring a gym membership to give Mary access to full training equipment; her gym is open 24-7 which is perfect because she does all this while working third shift.

We will also be providing ongoing updates on her progress. First things first - we know how critical the right equipment and form is. When we found out she'd been running on the same shoes for at least six months, we had to fix that. New kicks have been delivered, and Mary wore them for the 10k on January 23.

Brandy will be working with Mary to build core strength and cross training while we build the run stamina as well. The focus will be on form and building strength while protecting joints and preventing injury.

All of this will be tracked on an ongoing basis, with monthly (at least) zoom calls to keep the focus in the right place.

We know long-term goals can be tough to maintain; that's why we are targeting short-term wins on a regular basis. Some of you have already seen Mary throw herself into the 30-day plank challenge. #iplankwithmary - now it's your turn!

Would You Like To Be A Part Of This?

If you are wondering how Mary was chosen for this, the answer is simple - she applied and blew us away with her honesty and dedication. You can do the same. If you or someone you know needs a jump start, or help to keep going on your journey, contact us and tell us your story. We do not release any information without your permission, and will protect your privacy. This isn't easy to talk about sometimes, but know this - we've been there and are still working through it. We want to help you reach your goals and beyond.

Click here to join the 1DOS Shiver and help us change the world! Link redirects to our group Facebook page, where you can request to join. Thank you!

Next Up - Shark Shuffle 2021 - postponed due to pandemic... our new tentative date isJune 12, 2021
We headed to Albany/Capital Region for our first NY live race! Thanks everyone!

Sign up for the Shark Shuffle here! Virtual option available! 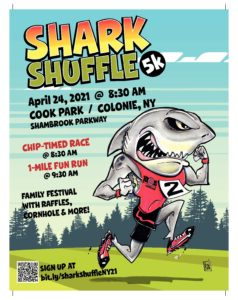